The question
Earlier we introduced two types of bolts: the serrated head bottom and the square headed bolt (M3, 6mm length). What screw – serrated, square headed, with or without hexagon socket – should be the default MakerBeam screw? 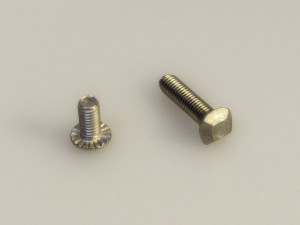 The regular bolts worked for the old, non-anodised, beams that had surprisingly high friction. The new, anodised, beams have a harder and more smoother surface. A surface that provides less friction and occassionally left a round head spinning. We wanted to eradicate this problem. Especially since there always was the suspicion about makerbeam that tightening would be a issue. 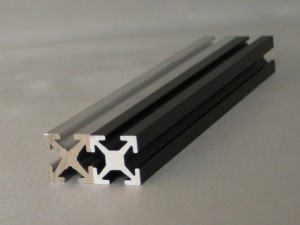 Clearly we needed to find bolts that provided better grip. The square headed bolts were the best option we thought. Unfortunately enough the production time was unclear.  The serrated head bottom then was introduced as a temporary alternative.  When the square headed screws came in – surprisingly fast –  we decided to make these the default MakerBeam screws. Not everyone was pleased by that decision and we started to have our doubts. We needed more input and a test was put in place.

Fit: The square head bolt fits the makerbeam profile better than a round headed bolt.

Sliding: Most jurors mentioned the fact that sliding the square headed bolts into the beam is a bit harder. When making a construction the jurors prepare brackets. Anders: “I prepare the bracket with four bolts and attach the nuts with a few turns. Then I slide them into the beam.” The square headed bolts need to be aligned a bit before you can slide them in. This takes more work than before. Anders describes this best. “It [the necessary alignment of each bolt] does not happen every time and it is not a huge problem and if I had known nothing else, I would accepeted it as part of the workflow.”
For Joel it is another factor in favouring the round headed serrated screws. They slide in easier.
Sean completely accepted the new ‘workflow’. He was sceptic because of the ‘sliding’-issue. But now only uses the square headed bolts. The other screws need fiddling to get in. “They were so large that they barely fit in past the ends of the beam.” According to him these two amounts of effort – fiddling vs. aligning – are roughtly equal amounts of work.  Sean has become a fan of the square headed bolt.

Backwards compatibility: We like looking forward and this is why we had these bolts tested. But there is the issue of backwards compatibility. The square headed bolts work well with old makerbeams (v1.0) and the new beams. (v2.0). Here is a link to link to our blog post ‘Version 2.0’. The serrated did not fit very well with the old beams.

The decision
The suspicion about MakerBeam that tightening would be a problem looms large. We realised this again upon discussing the results. Eradication of this suspicion is our main concern we realised. We feel the square headed bolts tackle this issue best. They provide a better grip and fit than other bolts. The square headed bolt will become the default MakerBeam bolt. Plus, we are looking into adding a hexagon socket on the head. The serrated head bottom screws will gradually disappear from our stock.

It is a fact the NEMA 17 brackets are in demand. What about servo motor brackets and brackets for micro stepper motors? We wanted to give it a try. Pieter Bos (@pieterbos) gave us a way out. He is the guy that makes our 3D printed end caps. 3D printing is a fun and easy way to try new ideas and 3D printers are very popular with makers. Why not have more 3D printed parts for sale in our shop? We asked Pieter and he started prototyping. You can see the steps he made in the picture below. 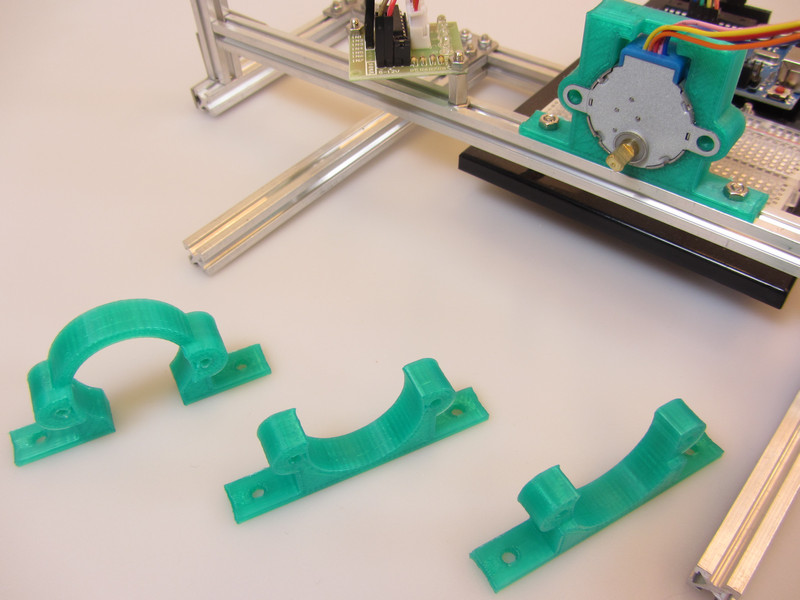 The first idea was to completely encapsulate the micro stepper motor. From there it went to the lean figure on the right. This design, printed in black,  will go on sale soon. They are printed in PLA – polylactic acid.

With the servo brackets we dismissed 3d printing but thought of laser cutting. This posed no problem for Pieter. He made some brackets and tried different materials.  From left to right: MDF, transparant perspex and finally opaque perspex (or polymethylmetacrylaat). We liked the last one the best. This one will go on sale soon. 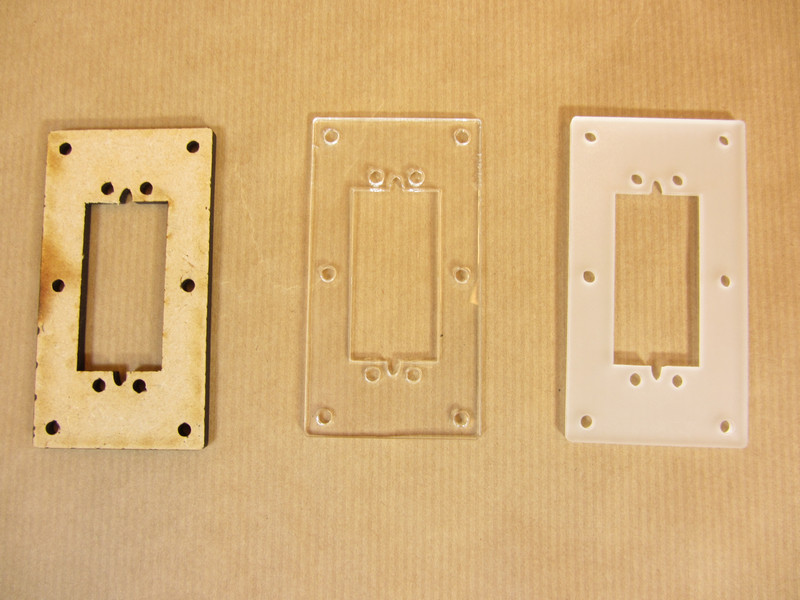 We ordered stainless steel NEMA 17 brackets. The samples came in and we were really pleased with their look, the polish and the MakerBeam artwork around the bracket. There was a surprise as well. Our manufacturer had added some aluminum anodised brackets in various colours. We thought the red bracket looked great. They go very well with our clear and black anodised beams. Below you will find a picture of the two.

A delivery time will be announced on our homepage soon.